Skip to content
Story and Photography by
Andrew Livelsberger 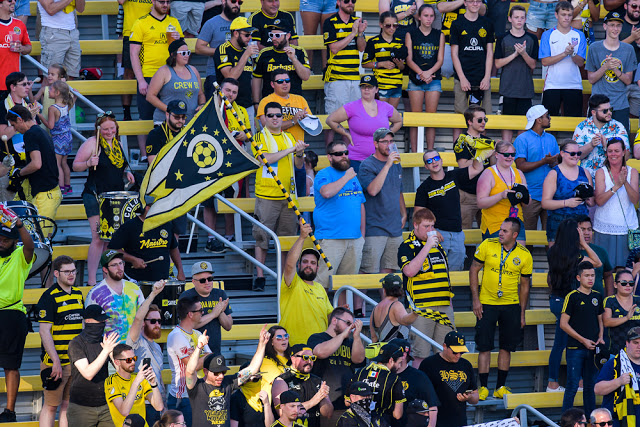 I have an awesome relationship with the group over at Midwest Photo Exchange.   They have always treated my professionally and backed up their sales.  So, I support them whenever I can.  Not only do I buy a lot of gear there, they have educational classes and workshops.  One of my favorites are their sports workshops.  I’ve been fortunate to have attended Columbus Clippers baseball as well as the Columbus Blue Jackets hockey in the past.

I’ve always wanted to get access to a Columbus Crew game and as soon as Midwest Photo announced that they would be offering a workshop there, I jumped on the opportunity.

Impression:
The workshops are great and I’ll talk a little about them…however, they need to be experienced to be fully appreciated.  You are there about half a day.  For what I consider a reasonable fee, you get a top flight instructor (Scott Rovak – team photographer for a bunch of the pro St. Louis teams and much more for 34 years), support from awesome Midwest Photo staff and a sponsored camera company.  This event was sponsored by FujiFilm.  They brought along with them all of Fuji’s top of the line gear for you to borrow and shoot with for the night if you wanted!!  Oh, yeah, and they feed you dinner and keep you hydrated as well.

I also wanted to give a shout out and kudos to Lara Page who was out Crew SC contact for the day.  During the tour of the stadium, she answered all of our questions and guided us through the whole match.  The Crew SC runs the matches with precision and everything is scheduled down to the second.  She kept us on point the whole time.

Here are some images taken during our tour: 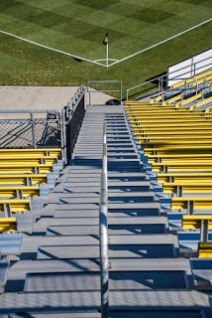 Above is the flag post in the corner kick area

This night, Crew SC went head to head with Real Salt Lake(RSL).   pretty close in the standings in their respective conferences.   RSL struggles on the road, so the advantage would be in Crew SC’s favor tonight.

From our suite by the stage side goal, we were able to get some images of the teams warming up. 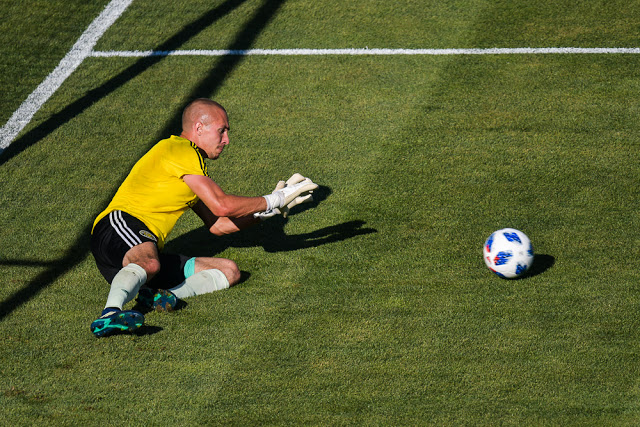 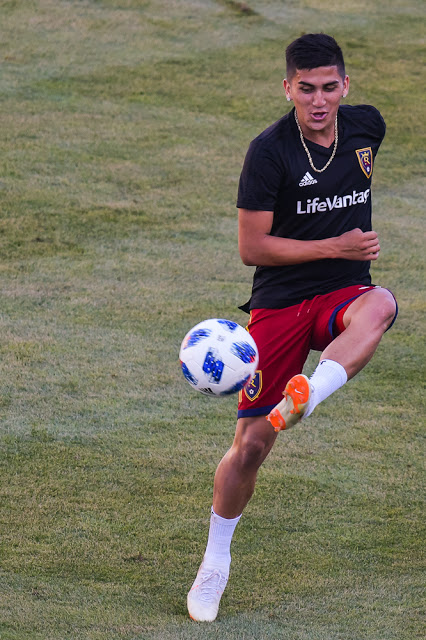 During opening ceremonies, a large flag was brought out and the American national anthem was sung.

Crew SC also honored our American veterans.  This Ohio Marine Corp veteran was given a crew SC scarf and a round of applause from the crowd, honoring his service to this country.

First goal of the night was relatively quick.  Penalty was assessed inside the box, and a penalty kick was given, which Zardes took advantage.    Putting Crew SC up 1-0.

Columbus would add another goal in the first half as well.   RSL would muster up a mid second half goal, but the Crew SC defense would hold, giving them the win 2-1. 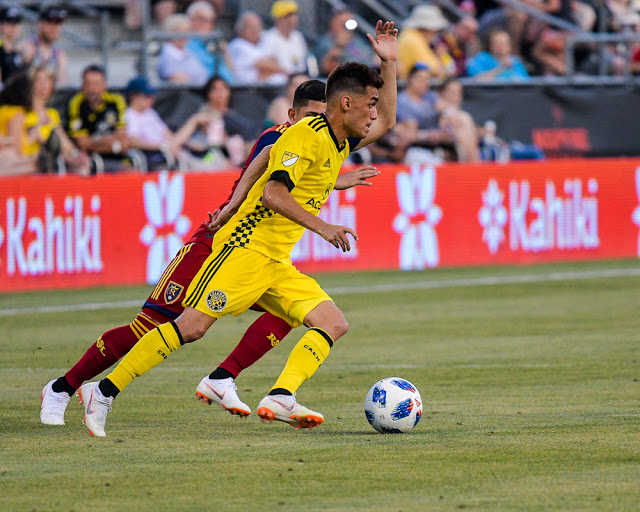 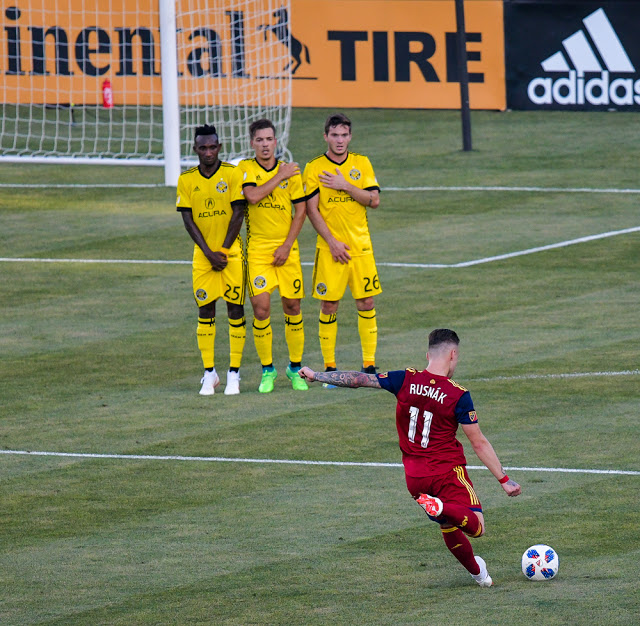 Let us not forget the fabulous Crew SC fans! 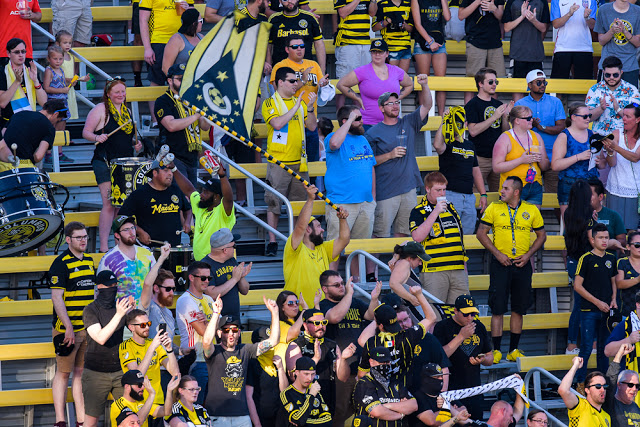 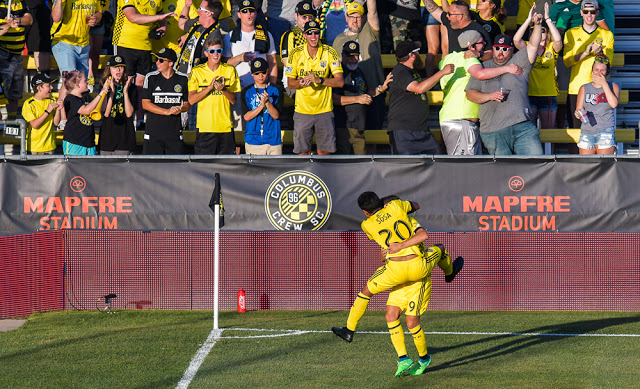 There were 2 stoppages throughout the night.  Temperatures were 96F with heat indexes pushing into the low 100F range.

Finally, some of the Crew SC players stopped by to greet and talk with the fans.  Despite playing in high temperatures for 90+ minutes, they had smiles on their faces! 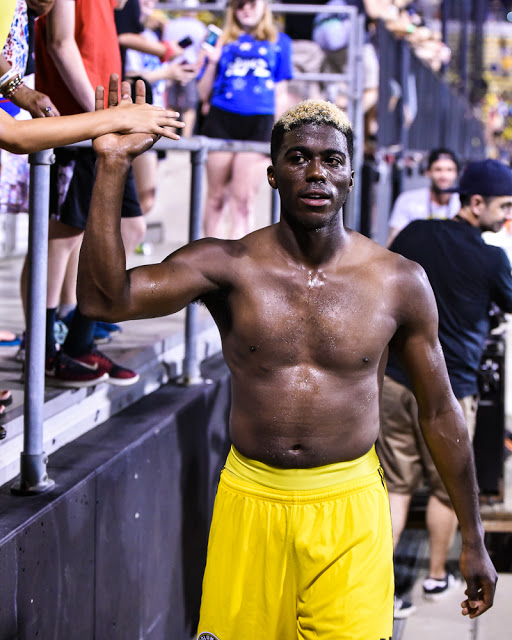 At this time, we do not know the future of the Columbus Crew.  As many know, the owner wants to move the team to Texas.  There are certain laws in place that state any Ohio teams that has used taxpayer money must allow for the team to be purchased and kept in state.  If no offer is made, then the team can be moved.  If you want more information on this, check out the Save The Crew website.

I for one hope that the Columbus Crew gets to stay and everyone has on opportunity to experience one of the most popular sports on the planet, right here in Central Ohio!  Whatever the future holds, I just know that I was fortunate to have this workshop and gain the access to cover this fast paced sport.