Background:
Andrew and Nicole Byrd and family had to endure one of the things that most parents fear.  A life threatening illness to one of their children.  Ryan Byrd, was diagnosed with cancer back in 2005.  It was a difficult time for all the family, including siblings Nick and Emma.  Cancer, the dreaded “C” word.  You never know how dealing with cancer is ever going to turn out.  The Byrd’s did the best they could.  They stayed strong and hoped for the best.  They found the best treatment options and followed them.

This battle with cancer has a happy ending, as Ryan fought, and won, his battle and is still in remission.

One of the organizations that helped the Byrd family stay strong and fight the good fight is Kids ‘N Camp.
This non-profit organization provides programs not only for the patient, but for the whole family to help them deal with the sometimes seemingly overwhelming task of fighting a cancer diagnosis.
More detailed info can be found HERE on the “Journey”

Impression:
10,000 Miles In 10 Days.
This is the task that Andrew Byrd has decided to take again.  Having made this journey last year, he has decided to make it again!  Why, you may ask, would Andrew take on such an en devour?   The short answer?   To give back.

The Kids ‘N Kamp program has meant a lot to the whole family.  Raising money to help fund the programs through a motorcycle ride was the vehicle Andrew thought best.  Over a 10 day period, he would ride across the continental US, hitting each state.

Donations were made directly as well as other fund raising staples as silent auctions, live auctions the day of the launch party.

The launch party was held at the American Motorcycle Museum Hall of Fame Office lot.  A live band was at hand and the “Byrd Boys”, musicians themselves got in on the action!   Ryan is an excellent drummer and Nick is an up and coming lead guitarist. 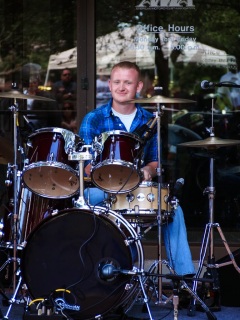 A few attachments to the Kawasaki.  😀