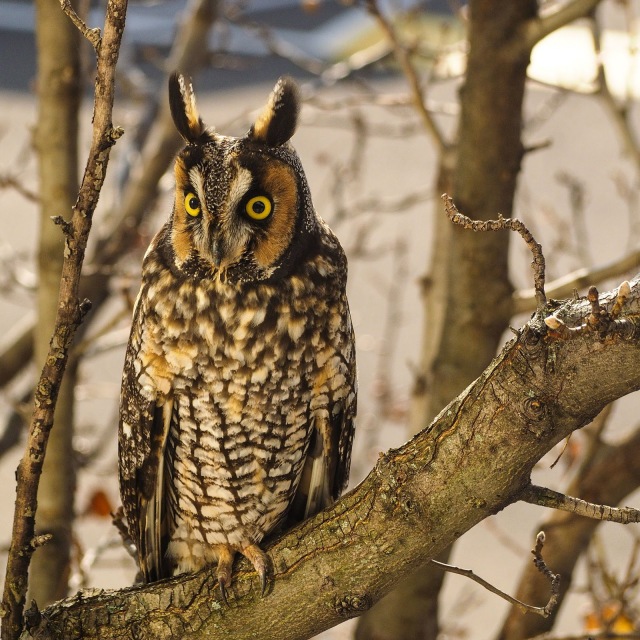 For a great guide on all Owl that are found in Ohio, check out this fantastic PDF provided by the Ohio Department of Natural Resources(ODNR).

Impression:
This is an interesting story.  On December 12, 2014 I received a text message from a co-worker.  It stated that there was an owl outside our second story office building and if I had my camera I should bring it.
Our office space is located along side the Columbus International Airport.

As a good photographer, I ALWAYS have a camera of some kind with me.  😀

When I got to the area at the second floor, I was expecting to try and find the owl 40-60 yards away in some trees by the parking lot entrance.  To my great surprise, the owl was actually perched in a tree that was no more than a few feet from the building!!

It took some time to get to a position to get a good shot.  The sun was rising behind the owl, and the windows were dirty and reflections were rampant as the viewing crowd was growing by the minute!

Speculation on what type of owl and why it would choose to sit there went on for hours.  2 of my co-workers did some research and they were 99% sure that the owl was a Long Eared, but we sent our suspicions to the ODNR office as well as some other birding experts.  They were able to confirm that it was, indeed what we thought.

Word was also given that someone from ODNR would come out the next day and see if the owl was still there.  They wanted to make sure that it was healthy and not perched there because of sickness or injury.

Earliest report of seeing the owl were roughly around 7am, as some workers coming into the building at that time stated that they thought they saw something large fly overhead.   Last confirmed siting of the owl was around 7:30pm from the security staff.

Reports from the day after the 12th were that the owl was no longer in the area.

So, why was it here?  Some believe it was just passing through.  I personally believe that it was resting an a grove of pine trees about half a mile away.  I noticed the same morning that there were landscaping crews doing some tree maintenance in that same grove.  It was startled from the area and went to safety in the direction of our building.  Most likely, it waited for nighttime, flew off to hunt and found a better, more secluded area to rest in during the day.

The owl was sitting in the same area all day and slept most of the time.  A moment came where a mocking bird flew into the same tree and started posturing at the owl.  Possibly, it dd not like the owl near a nest that was in the same tree.  The owl didn’t move, but it was wide awake at that time.

A lot of people saw that owl that day, and their lives were touched, seeing such a majestic animal that close.  It is one of those once in a lifetime deals you may never get to see a Long Eared Owl in the wild like that again, as they are nocturnal and tend to stay in the trees during the day time.

Since getting these image of the owl, I’ve named it Fonzie.  Why?  Because it was cool, just like a little Fonzie.  There is an 8×10 portrait of little Fonzie in my cubicle now to allow me to remember that special visit and possibly one of the most unique Christmas gifts!