Background:
Wizard World is one of the largest comicon/sci-fi conventions held in Central Ohio.  Day 3 gave us witness to light saber fights and more cosplay!

Impression:
Winding down the last day, the cosplayers were back.  Most new, but there were some that made appearances all 3 days.  This was a long and exciting weekend.  Capped off by lots of panels, competitions and just more of the same cosplay love.

The stand out entertainment for Day 3 for us was the light saber duel on the entertainment stage.  The Saber Legion, a worldwide saber club focusing on saber combat and sparing put on a few matches.

A representative from The Saber Legion explained a bit about the organization.  Then we got a run down of the sparring rules and how points are scored.    This is not a scripted or choreographed fight sequence!   These guys are involved in a sport very similar to fencing.   As you’ll see in the images below, there is safety gear involved. 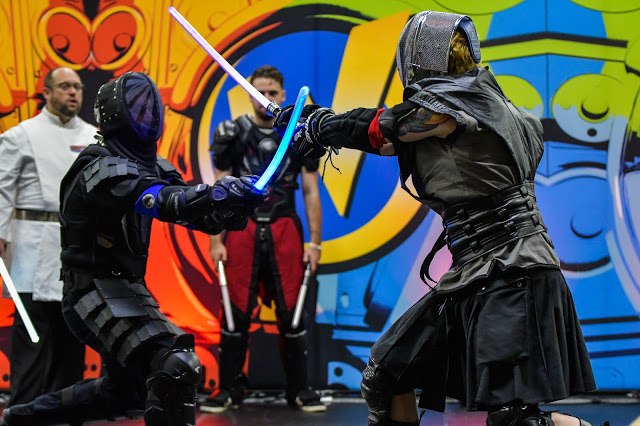